Adventures of the Bug Boy Greg Jepsen - When Greg was 7

When Greg was seven, he and his brother Scott found a very large gopher snake in the hills behind our house in Moraga, CA.  True to the actions of all small boys, they decided to bring the beast home.  It was smelly and big, but fortunately non-poisonous.  It was at least six feet long and ten inches around.  I agreed to let them put it in a cage and keep it temporarily, but they had to find it something to eat.

Greg took the snake out for walks and draped it around his neck to show all the kids on the block that he wasn’t afraid of the dangerous predator.  He bought a little white mouse at the pet store for the snake to dine on, however the mouse just cruised around the cage freely while the snake ignored it.

The huge snake gave Greg a lot of clout with the smaller crowd for a few weeks, but at the end of the month it had still not eaten the mouse, so I insisted the boys return it to the hills where they found it.  Despite numerous cries of protest, the snake was finally taken back to its home in the tall, dry, grass of the hillside.

To Greg’s great disappointment, it was never seen again.   The little white mouse, however, remained for quite a while, eating normal mouse pellets, and somewhat alleviating the loss of the “beloved” gopher snake.

Posted by Unknown at 2:33 PM No comments:

Adventures of the Bug Boy

When Greg was four, he must have believed he was superman, even though he was very small and skinny. Once I found him nearly at the top of a thirty-foot tree in the back of the apartments where we lived. The branches of the tree hung over a deep ditch filled with water and snapping turtles. There was no way I could climb up to get him, so I told him to come back down the way he had climbed up. Thankfully he managed, scrambling and slipping all the way back down.

Greg likes to remember the time he came up from the same creek with a handful of big, fat worms to show me. When I saw my little boy with all those squirming, dirty globs of pulp, I immediately made him drop them and cleaned off his hands. He was terribly offended. The last thing I remember about that day was that little, face with great big tears rolling down his cheeks, because he couldn’t keep those treasured worms!

Later that summer, he was crossing a bridge over the same creek, but not like most would cross the bridge. He chose to balance on the slender railing. The next thing I knew his friends had come to the back door screaming, “Gregory’s dead! He fell into the creek and he’s not moving! Naturally I ran hell bent for election and sure enough, there at the bottom of the creek, laying very still half in the water, was my little boy.

By now the neighbors had all gathered and were telling me not to move him because he might have a neck or back injury. However, seeing my baby lying there so still was more than I could handle and I immediately jumped down and picked him up. He was unconscious, so I put him in the car and raced to the hospital. By the time I got there, he was awake and wondering what all the fuss was about.

This was all just a glimpse of what was to come. There was never a dull moment, and as Greg got older, the daredevil in him got even riskier, and actually funnier!
If he lets me, I’ll tell you about the Halloween costume!


By Joan Virden, writer and Greg's mother
http://www.joanvirden.webstarts.com
Posted by Unknown at 2:30 PM No comments: 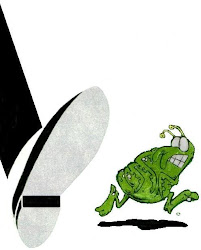